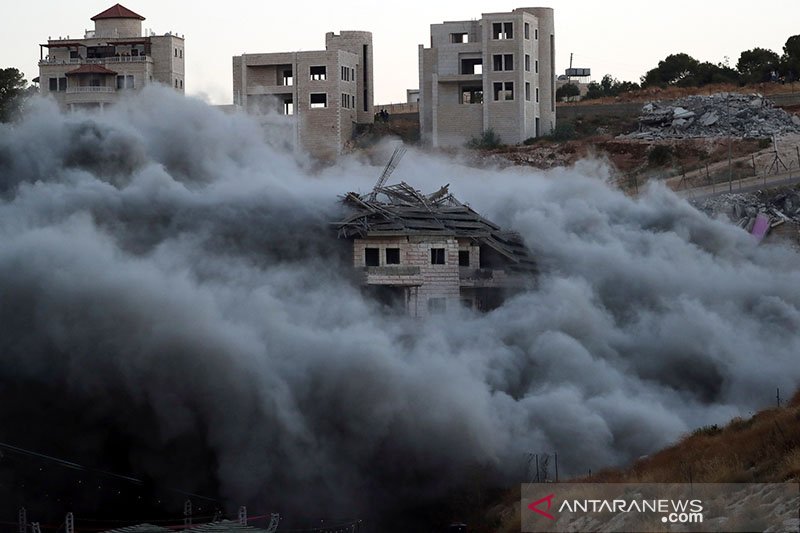 The demolition of a Palestinian building by Israeli forces in the village of Sur Baher on July 22, 2019 [Ammar Awad/Reuters/FA]

"Indonesia demands such action be put to an immediate halt, as it is in violation of International Laws and UNSC resolutions," the statement from the Indonesian Foreign Affairs Ministry said.

"The development of illegal settlements by Israel and the tunnel construction to Al-Haram al-Sharif are a de facto annexation which will further threaten the peace process," the statement added.

Aljazeera reported that hundreds of Israeli troops with bulldozers tore down homes in the Palestinian village of Sur Baher despite local protests and international criticism.

Residents of the village’s Wadi al-Hummus neighborhood told local media Monday that 16 residential buildings with about 100 apartments were being demolished.

"Preparations started past midnight as hundreds of armed Israeli occupying soldiers/ bulldozers stormed the town. Families threatened with demolitions were woken up/moved out of their homes," said a tweet by the Palestinian Liberation Organization (PLO).

The Israeli military considers the homes, which are close to an Israeli separation wall that crisscrosses the occupied West Bank, a "security" risk.

"We heard very loud bangs coming from a building right next door to where we are now. It was from a large mechanical digger that was ripping off part of the roof of a building that was home up until this morning to two families," he said.

"The father of one of the families has been sitting on a chair in the street watching his home being torn apart," he added.

The sprawling village of Sur Baher straddles the line between occupied East Jerusalem and the occupied West Bank. It was captured and occupied by Israel in the 1967 war.

Israeli forces levelled a building in the West Bank and destroyed 50 percent of a home belonging to a Palestinian family of 10 on the East Jerusalem side, Matheson said.

"They took the family away – we heard screaming and shouting. And within two hours, 50 percent of the building has been destroyed."

The demolitions marked a "very somber and sad day" for Palestinian residents, he said.